“Christian ministry often began in the schools that were established to teach. The priests, clergymen, and laymen who were first motivated toward this ministry saw no serious separation between the spiritual and secular education of deaf students. This concern arose later. However, the church’s ministry to deaf people began in the context of the school.” – Dr. Harold Noe, History of Religion Among the Deaf[1]

The Church Mission to Deaf-Mutes came into existence in the second half of the nineteenth century. In reviewing the historiography of deaf religious history in the previous post, I suggested that deaf educational practices had an important impact on the lives of deaf people throughout this period (the first post in this series is also available). How do we characterize the relationship between religion and education and why is it particularly important in the second half of the nineteenth century for members of the Mission? Dr. Harold Noe’s History of Religion Among the Deaf provides some insight. 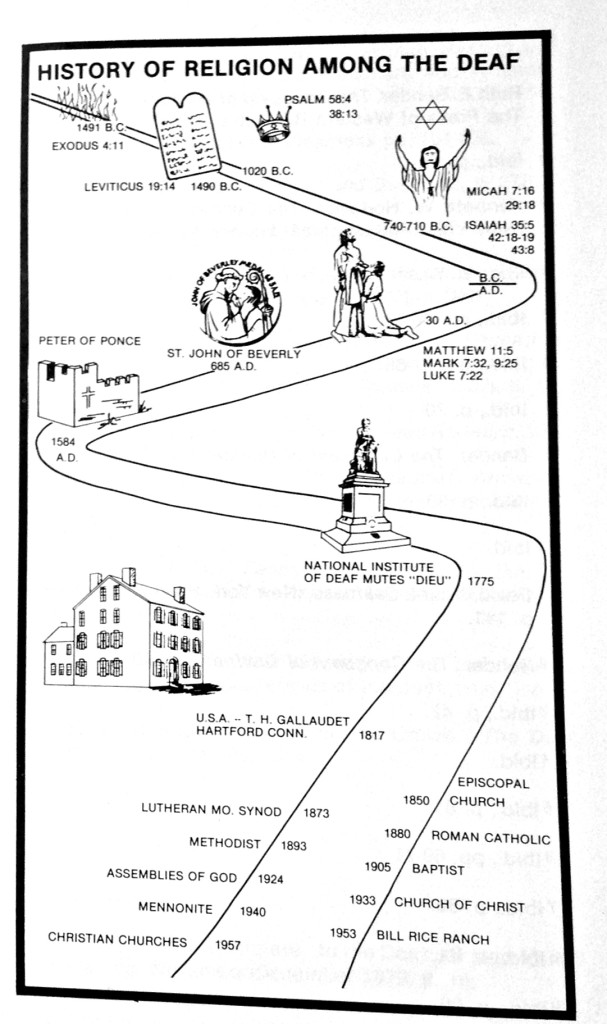 In this brief text, Noe describes key features in the development of a deaf ministry.[2] Included in this work is an image entitled “History of Religion Among the Deaf”. The image expresses the deaf religious of history as a winding road and the destinations that Noe has included are quite telling. Unsurprisingly, religious scripture lay at the start of the journey. These passages mark each mention of deaf people in the bible and are commonly understood to have shaped the perception and treatment of deaf men and women.  At the end of the road Noe notes the creation of different forms of religious service for deaf people. From scripture to practice, Noe suggests that deaf religious history has travelled a chronological path. Included in this history are the great ‘firsts’ of deaf education; Pedro Ponce de Leon, a Benedictine monk that taught deaf children housed at his monastery in Spain; Abbe Charles-Michel de l’Epee, founder of the National School for the Deaf in France; and Thomas H. Gallaudet, founder of the American School for the Deaf founded at Hartford, Connecticut.

The assertion made in Noe’s picture, and the prevailing narrative of deaf religious history, is that education and religion are deeply intertwined. In many ways, these subjects are impossible to separate. The Second Great Awakening is frequently understood to be the impetus behind the growth of deaf education in the United States.[3] From the founding of the American School for the Deaf in 1817, the character and direction of residential deaf schools in the United States reflected the cultural and philosophical concerns of Americans.[4] In the first half of the nineteenth century, these concerns centered on the spiritual and moral lives of uneducated deaf people.  Collins Stone, Superintendent of the Ohio Institution for the Deaf summarized these attitudes toward education clearly in 1848.

“We regard congenital deafness as one of the sorest calamities that can befall a human being… He knows nothing of the existence of God, of his own spirit, or of a future life… If he dies unblessed by education, he dies in this utter moral darkness, though he has lived in a Christian land; though from his youth he has frequented the temple of the true God, or daily bowed around the altar of family worship. To open the doors of his prison, and let in upon him the light of truth and the consolations of religion, is a work in which every benevolent mind must feel a deep interest.”[5]

Stone was not alone in expressing these concerns. Douglas Baynton has clearly and concisely described the prevalence of these attitudes in his text Forbidden Signs. “At mid-century, the calamity of deafness still was ‘not that his ear is closed to the cheerful tones of the human voice’ but that the deaf person might be denied the ‘light of divine truth.’”[6] It was these beliefs that enabled the spread of deaf education and it is unsurprising that religious leaders featured prominently in the establishment of new institutions. Between 1817 and 1850, eighteen deaf residential schools were founded, eight of these under the direction of ministers.[7] At least three schools were established at the urging of members of the Mission.[8]

Religion also shaped instruction at deaf residential schools. In 1873, Rev. Thomas Gallaudet, rector of St. Ann’s and General Manager of the Mission recalled that religious instruction figured prominently at his father’s school. “The pupils were brought together in the chapel, twice every Sunday, for divine worship and religious instruction, conducted in the sign language. They also had morning and evening prayers, daily, during the week.”[9] The American School for the Deaf was the first to incorporate these practices, but the feature was soon pattered in the institutions that followed.[10] The overlap between residential deaf schools and religious organizations was so complete that Alexander Manson’s research on Protestant Churches for the Deaf suggested “all of the Episcopalian clergy for the deaf had some teaching experience in the schools for the deaf.”[11]

Though deaf education was thoroughly linked to religious organizations in the nineteenth century, the adoption of worship services in sign language, outside of the school was not widespread. In fact, St. Ann’s Church, founded in 1852, is believed to have been the first attempt to form a separate church mission for deaf men and women. In the second half of the nineteenth century, the members of the Mission promoted the belief that the unique features of the Episcopal Church best prepared them to bridge the gap between residential religious services and community worship.

They believed that the use of the Book of Common Prayer and a common church calendar enabled missionaries and deaf community members to maintain their worship practices even as members of the Mission traveled between communities.[12] The written liturgy would enable the growing population of literate deaf adherents to practice privately or to take part in services with hearing people. Gallaudet stated, “A common sign language and a common manual alphabet are used throughout the whole country. These are instrumental in conveying and receiving ideas with great rapidity. Deaf-mutes enjoy signs as those who hear enjoy sounds. But, as deaf-mutes are led by their education to understand the English language, they can also derive great profit by using Prayer Books and Bibles at the services of any Episcopal Church in the land.”[13] Missionaries sought to ensure that deaf adherents would be able to understand the lessons contained in the Book of Common Prayer and discussed at great length the importance of conveying religious concepts appropriately so that congregants would be able to understand the ideas in written English.[14]

The importance of deaf education in the lives of deaf people cannot be overstated. Attending deaf residential schools introduced deaf people to community, language and culture. These institutions prepared deaf people for employment, provided literacy skills, and introduced many deaf people to signed languages. However, deaf historical study has yet to examine the way in which these spaces also provided an introduction to religion.  In many ways deaf residential schools prepared deaf people to be congregants of the Mission. It also prepared students to become missionaries. In the next blog post I will examine the emergence of the Mission and the ordination of deaf men to the ministry. To what degree did education and the Mission influence each other? In what communities were mission services provided? What relationships were developed between deaf residential schools and missionaries traveling through these spaces? What answers can be located in the annual reports of the Church Mission to Deaf-Mutes?

[2] Noe, The History of Religion Among the Deaf (Book Two).